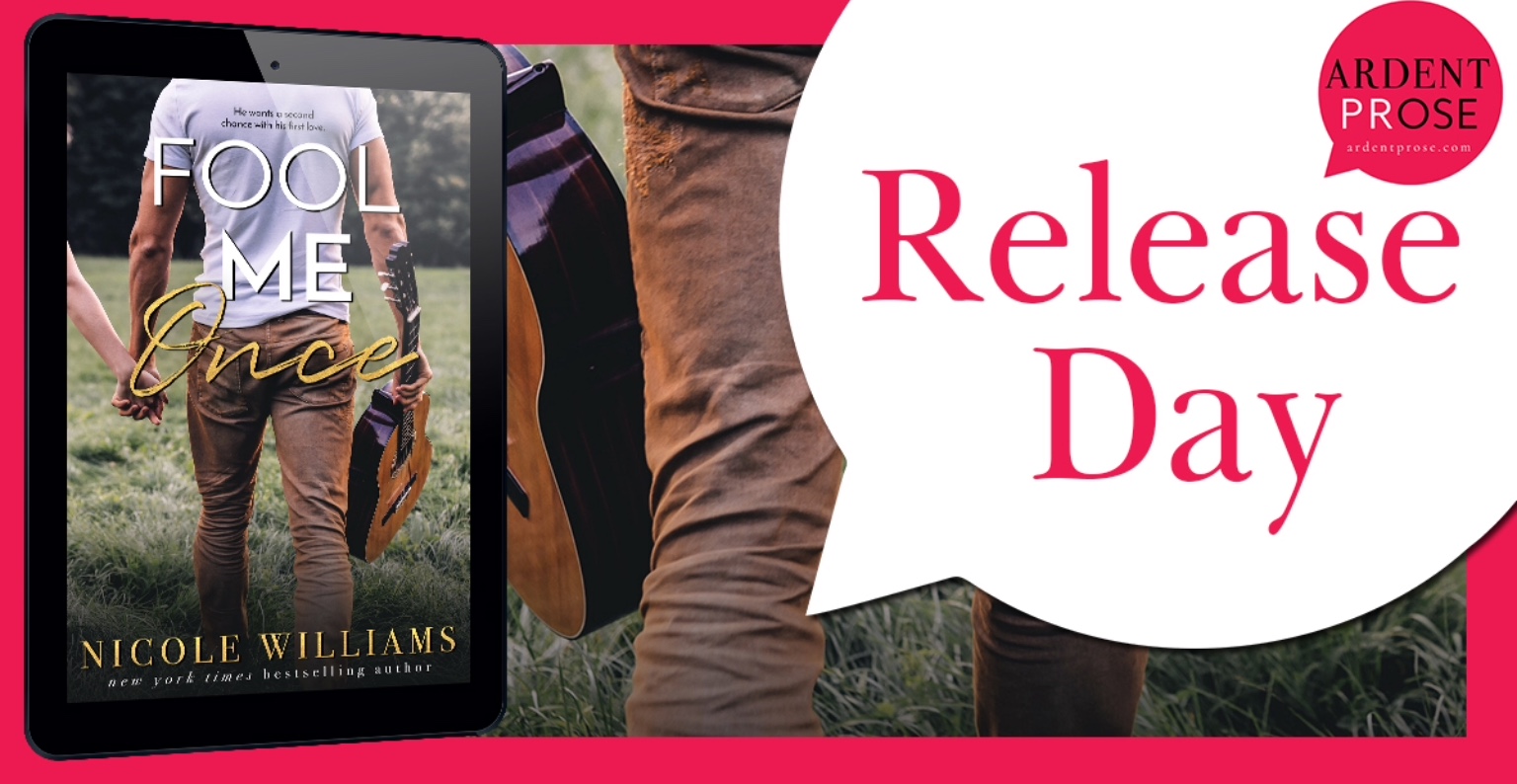 FOOL ME ONCE by Nicole Williams is available now!

Second chances are for kids, diets, and shelter pets—not for relationships. Especially not one like Chase and Emma’s.

Before he was writing chart-topping hits and smashing record sales, Chase Lawson was Emma’s childhood friend and first love. They promised each other forever, but forever expired at eighteen, when he landed a major record deal and left Emma and their hometown behind.

Ten years later, he shows up at their high school reunion with a proposition she can’t refuse. Six months. Seven figures. He gets a chance to clean up his reputation, and she gets the means to restore the old family farmhouse. It’s only for show—hold hands in public, kiss for the cameras—but boundaries blur behind closed doors.

It isn’t long before Emma feels her resolve slipping, crushed by the shadow of the boy she grew to love in the man selling out stadiums of present. Can Emma resist one of the most irresistible bachelors in the world? Or will she fall for the same man twice?

“We’ve got to go over something first,” he said, smirking at my efforts to budge his arm.
“What?” I asked, annoyed.
“We’re going to be a couple in the public’s eyes. Which means we’re going to have to do certain things that couples do.”
I blinked at him. “Couples don’t do that in public. At least not the normal ones.”
He gave a grunt of disbelief. “I’m not talking about sex.”
“Then what are you talking about?” My voice was rising the more flustered I became. The lack of apparel, the warm water, the way Chase’s brown eyes seemed to melt when he looked at me a certain way . . . I was struggling to keep my composure.
“Kissing.” He shrugged as though it were obvious. “We’ve had ten years to get rusty. We don’t want to look like a couple of fumbling amateurs when we kiss in public for the first time.”
My mouth fell open a little as I tried to determine if he was serious. “Kissing is like riding a bike. We don’t need to practice to get it right.”
The corners of Chase’s eyes creased. “It’s more like riding a unicycle. Once you figure it out, with enough consistency, no problem. But if you go a decade without climbing on that unicycle, you’re starting right back at square one.”
I had to bite the inside of my cheek to keep from laughing. “You’re comparing kissing to a unicycle. You’re just as romantic as I remember.”
Chase treaded closer until my legs were brushing against his with each kick. “Come on. One kiss. Practice makes perfect.” His arms drew in, entombing me in his presence. One brow carved into his forehead. “That is, unless you’re scared to kiss me in private, half-naked in a swimming pool, because you still harbor some kind of feelings for me . . .”
I shoved his chest as a snap reaction, realizing too late that I should not touch him when he was this close, when I was this conflicted. “Fame has really gone to your head.”
His shoulders rose above the water before dipping below again. “So? Prove me wrong.”
“Fine.” The word materialized on its own. “But if you even try slipping me tongue, my knee is winding up in your groin.”
He wet his lips, fighting a smile. “When have I ever complained about any part of you nestling down there?”
My hands balled at my sides as I attempted to approach this whole thing like a science experiment. Objectively. Neutrally. Emotionlessly. “Just kiss me and get it over with.”
His smile quirked. “Once you’re finished whispering sweet nothings into my ear.”
When I tried to push him away, his hands circled my wrists. Chase’s eyes found mine, the color of his irises nearly indistinguishable from his pupils. My chest moved quickly when he swam closer, his head angling as his lips aligned with mine.
He hadn’t even kissed me and I’d lost all sense of direction. Up was as good as down in my present state. His breath fanned across my lips as he waited, perfectly at ease having me trapped in the corner of his pool, our mouths a sliver of air apart.
His grip on my wrists relaxed right before his mouth finally connected with mine. My body froze the instant he kissed me, but it didn’t last long, seeming to melt one piece at a time.
I didn’t realize I was sinking until Chase’s arm cinched around me, pulling my shoulders back above the water, his mouth not missing a beat. The last piece of me to unthaw was my lips, but the moment they did, they matched his urgency. My arms wound behind his neck as I drew closer, our bodies tangling beneath the water as he kissed me in a way I hadn’t been kissed in years; in the kind of way that made a girl feel delicate and invincible at the same time.
Chase treaded water, holding us both above the surface, the planes of his chest rising to meet mine with our uneven breaths. Before I knew it, our tongues were tying together, though it wasn’t him who’d broken that rule first. His chest rumbled against mine as my mouth and hands grew more feverish, no longer under the constraint of my better judgment.
Kissing Chase was exactly as I remembered, yet totally different. The scrape of his calloused fingers against my skin felt the same, yet there was a newfound strength to it. His full lips moved with mine in a dance we’d mastered years ago, but there was a resolve I’d never tasted so deeply before. The way he held me was exactly the same, though the contours of his body had changed.
When my chest was hammering from breathlessness, Chase broke the kiss, managing to evade my ensuing advances. His eyes remained closed for a minute, droplets of water winding down his face from where my hands had been.
When his eyes finally opened, the look in them made my head dizzy, even as I reminded myself this had been a practice kiss. Nothing more.
“How was that?” he asked.
I had to look away in order to make my answer seem convincing. My shoulder lifted out of the water as I shaped my most detached expression. “You were right. Like riding a unicycle.”
“No, you were right.” Chase’s hand drifted up my back, his rough fingertips somehow soft against my skin. “Kissing you is like riding a bicycle.” 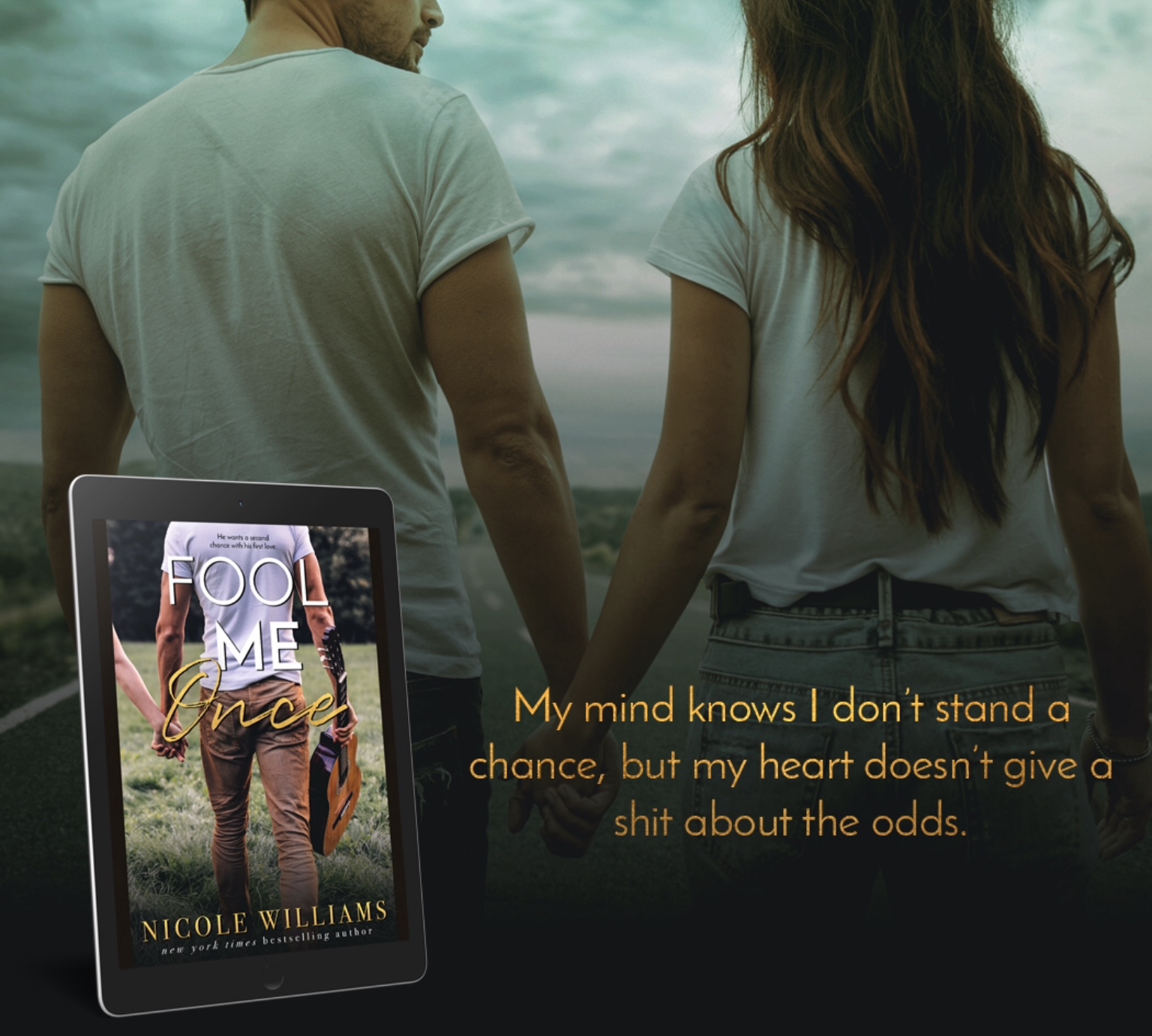