“This series grips you by the throat and refuses to let go—and you’ll be begging for more the entire time.” — Sierra Simone, USA Today Bestselling Author

On the Edge, the next intense installment in The Edge Series from New York Times bestselling author CD Reiss, is available now!

“In Iraq, I promised you a bed of rose petals.” He grabbed my hand under the table, tightening his grip as if he were falling from a precipice and our connection was the only thing saving him from certain death.

“You smell like apples. Roses were wrong.” There was nothing soft about his tone, but his quiet words were for me alone. “I want everything to be right for you.”

I caught his gaze and held it. He was confident. Arrogant. Sure he had a place in the world. And under that was the man who needed me to be that place.

“If I could…” He smiled and shook his head at a silly thought he wanted to dismiss but couldn’t—a contradiction in keeping with the whole man I married. “If I could write my love in the sky, it wouldn’t be big enough. I’d run out of room. I’d fall out of the air trying to say it all.”

He was saying it all.

And he was falling out of the sky to do it.

FUCK EVERYTHING TO THE WAR AND BACK

I am seriously offended that C.D. Reiss did THAT to me. I know she doesn’t know me but God damn it I just want these two to be happy. WHY IS THAT SO MUCH TO ASK???

*deep breaths* I obviously love and respect CD too much that was just me being an idjit because I do not know how to process my feelings like an adult.

I am telling you guys, this series has aged me ten years and given me permanent heart problems. I thought the last book was hurtful but this book practically ended me. I AM CANCELLED UNTIL FURTHER NOTICE.

The thing about this story is that it is absolutely vivid, exciting and just so breathtakingly beautiful. It doesn’t have the “normal” kind of love but who the hell needs that? This story is unconventional, thought provoking and so bloody real, it’ll haunt you. 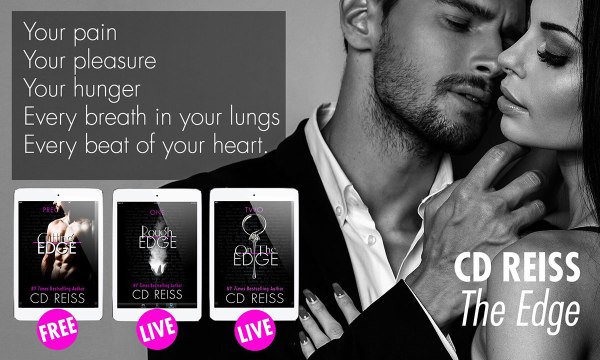 Purchase On the Edge today!