IT’S A LONELY RIDE TO HELL!
Are you ready for Linc and Kelly?
Happy RELEASE Day to Janine Infante Bosco! 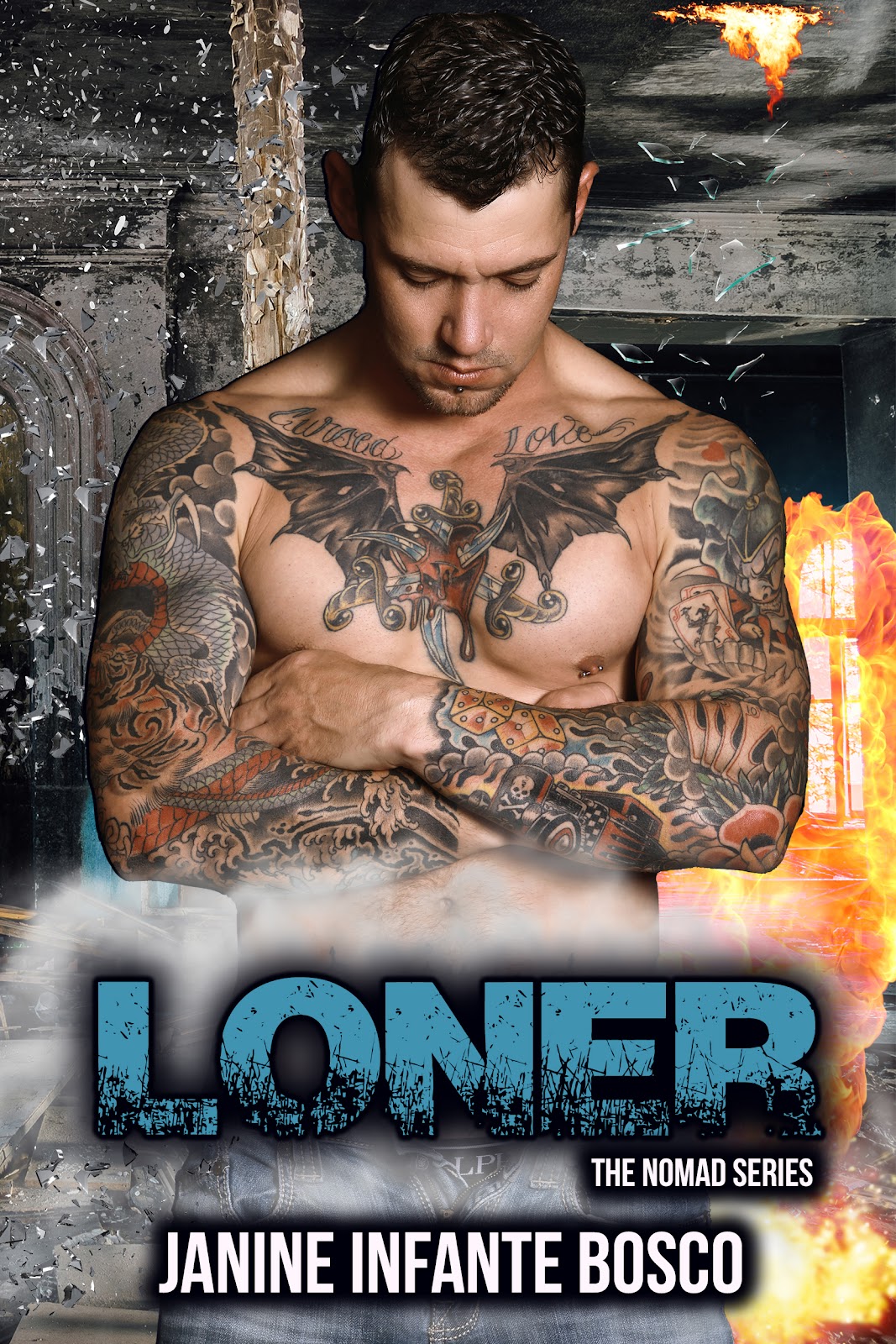 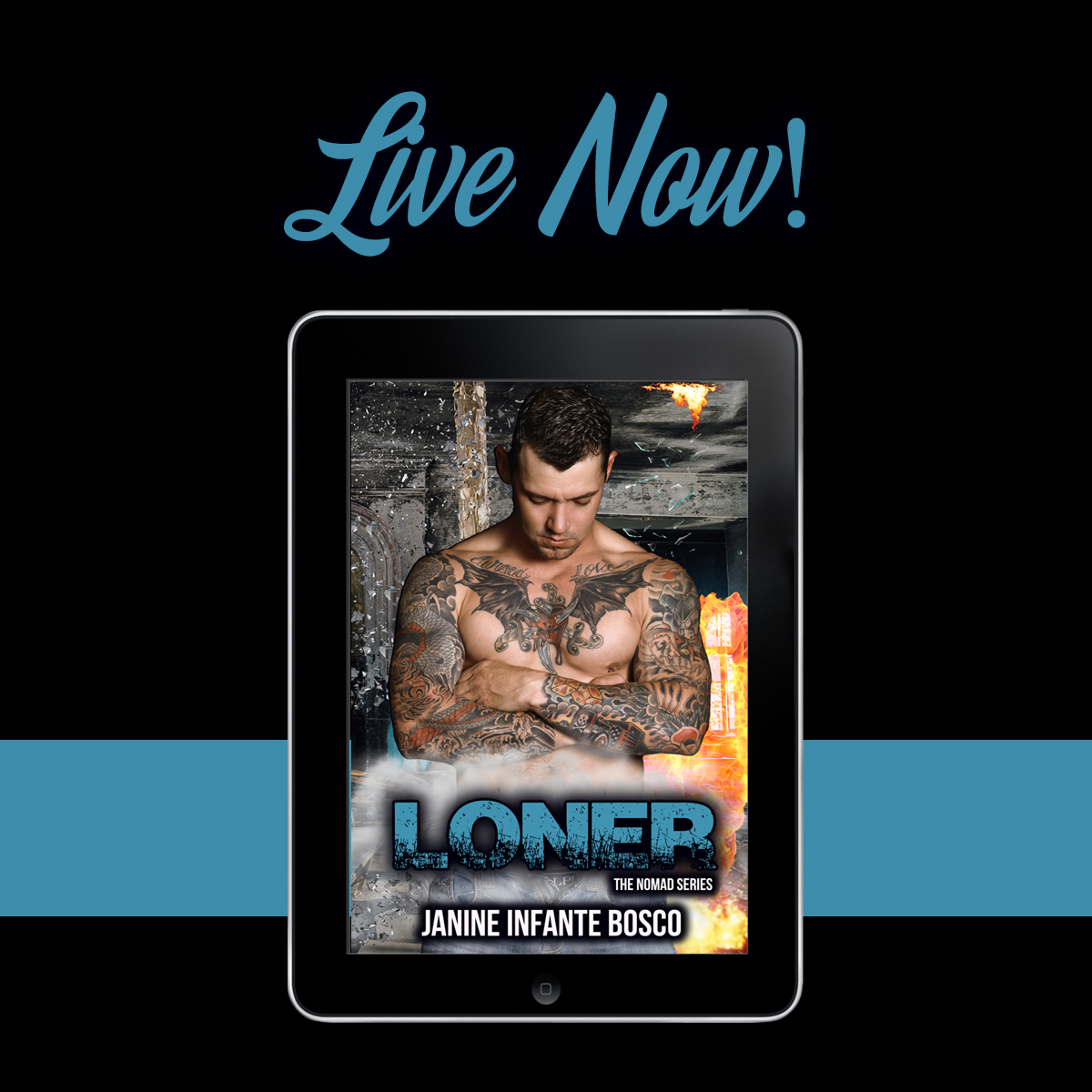 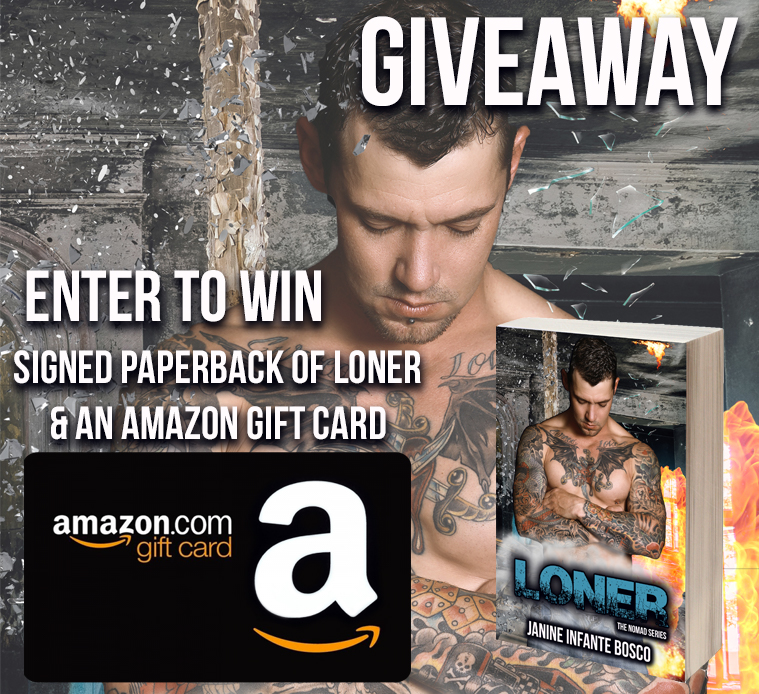 A man who can’t visualize his future will always revert to his past.
To where he came from and all the ways he failed.
The murder and mayhem that changed his life and darkened his soul.
The legacy of who he is will burn through his veins and ominously guide him to hell.
A place where he pays not only for his sins but the sins of his father as well.
A hustler by nature, a loner by choice, I am the spawn of Satan.
I am Lincoln Brandt and I am the son of Cain.

Reckless and rebellious, I’ve spent most of my life running away from one mistake only to chase another.
At the end of my rope with nowhere left to turn, I’m about to make the biggest one of all.
Face to face with the bastard who broke me, I lay it all on the line for him.
My heart and my life.
Heaven is overrated and the ride to Hell doesn’t have to be lonely.
The stakes are high.
The risk great.
It’s do or die.
Together we’ll ride.
Forever we’ll burn. 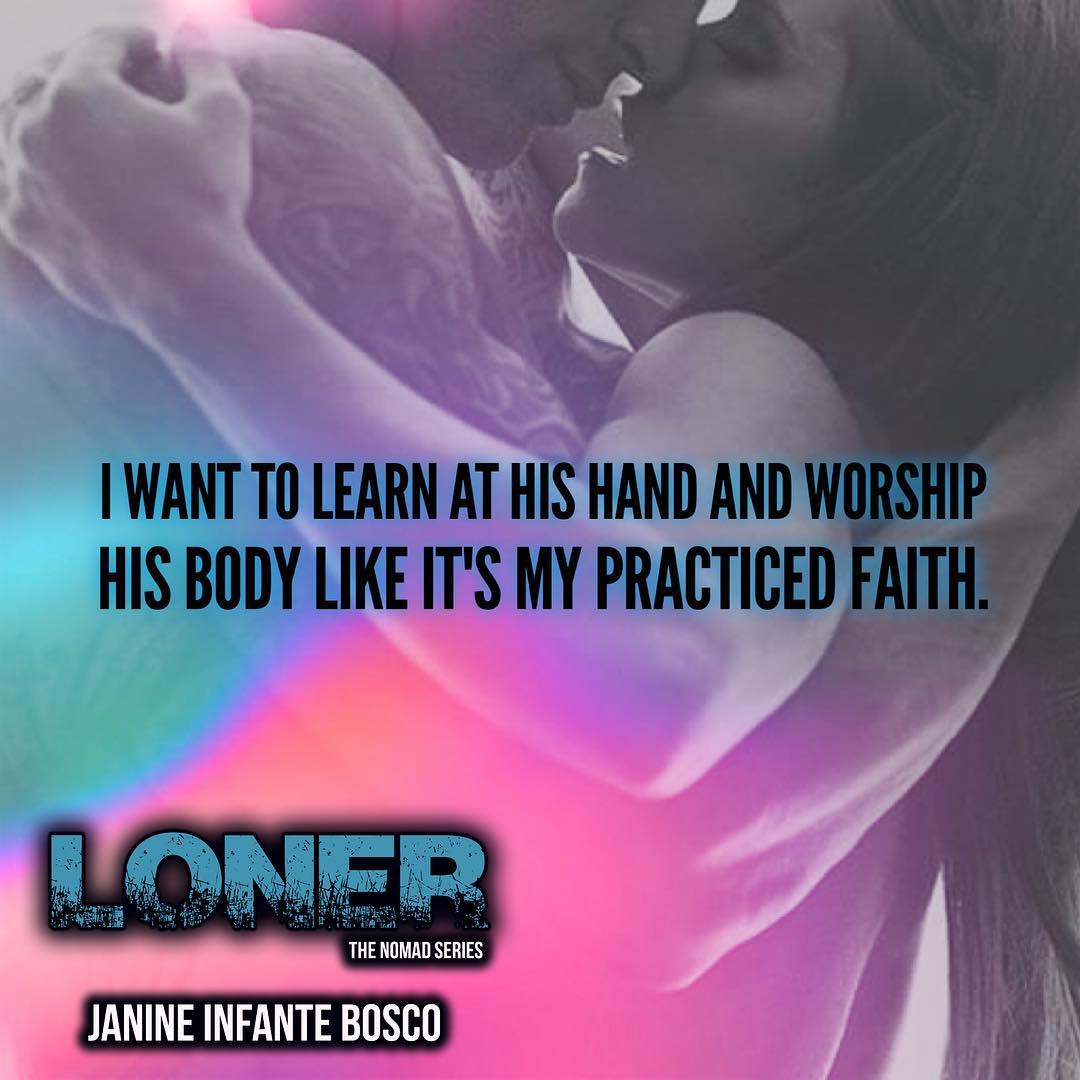 Standing off to the side, surrounded by Shady and Sin I finally spot him and watch as the three of them raise their shot glasses. Through the fog of smoke, I can still see him flinch as the liquor slides down his throat and the smile that appears as Sin drapes his arm around his shoulders.
My stomach twists with need as I continue to stare at him. Wishing I could be next to him, craving the feel of his arms around me and his hot breath against my ear as he whispers all his filthy promises.
“What’re you doing out here?” My uncle’s deep voice calls from behind, startling me.
Tearing my eyes away from Linc, I turn to face him and lift my water bottle.
“I was thirsty,” I lie.
Lifting a glass to his lips, he narrows his eyes. My shoulders slump under his intense scrutiny and I know he sees right through me.
“Get the stars out of your eyes, Kelly,” he growls, lowering the glass to his side.
“I don’t know what you’re talking about,” I argue. With his free hand, he grabs me by the shoulder and spins me around so I’m facing the party again.
“Look at him,” he demands. Stretching an arm over my shoulder, still holding the glass, he points to Linc. “You see what I see?”
Swallowing the lump in my throat, I know there is no way he can possibly see Linc the way I do. He doesn’t see the parts of him that belong only to me.
“He belongs to his brothers, to his club, to the reaper on his back and that’s all he’ll ever belong to,” he says. “Men like us don’t stick and the sooner you realize that the safer that young heart of yours will be.”
Men like my uncle are stubborn old mules who believe everyone is cut from the same cloth and has the same beliefs. Explaining that Linc and I share a special bond would be a wasted effort and the objection sitting on my tongue fades away as Linc tries to hide his smile by swiping a hand down his face. He’s not like my uncle. He’s not like any of these guys.
“Do yourself a favor and forget about him because I promise you if you don’t he will break you. It won’t be his intention and you won’t see it coming but, it will happen and the both of you will be helpless against it.”
Having had enough of his brutal warning, I spin around and glare at him.
“Thanks for the advice,” I mutter.
Without another word, I brush past him and hurry back to my room. Once inside, I chuck the bottle of water against the wall and crawl into my bed. My head hits the pillow and I stare up at the ceiling, digesting Uncle Al’s words.
As the hours pass it becomes harder for me not to believe he was right. Things are going to change for us. He will get pulled deeper into the club and the year we spent getting to this day will be a memory. A stepping stone on the path to hell.
Deciding I should quit while I’m ahead, I turn on my side and reach for the light on my nightstand. As I switch it off my door opens. I smell him before I see him. Leather and whiskey mixed with the musk of his cologne. The lock slides into place and when I roll over I find Linc leaning against my door. The smile he was trying to hide earlier, shines unabashedly back at me, making him look younger.
“There you are,” he says, kicking off the door. “Why are you in here?” he questions, stepping further into my room. Pushing the comforter down, I sit up and lean against the headboard.
“Where else would I be?”
“My room,” he replies, shrugging off his leather vest. Carefully, he drapes it over the chair in front of my desk and I watch as his eyes linger over it a moment before he turns back to me. “Our room,” he amends.
The declaration that his room suddenly has become ours causes my stomach to flip as he walks around my bed.
“I didn’t want to impose,” I tell him as he sinks down onto my mattress. Spreading his legs, he bends over and pulls at the laces of his moto boots. My mouth grows dry and I forget only seconds ago I was declaring him part of my past or that I spent half the night picturing him with other girls.
“I saw you,” he rasps. “Standing in the hallway, I saw you.”
“I went to get a drink,” I murmur. Kicking off his boots, he twists his frame to face me and rolls up his sleeves.
“I saw you and all I could think of was how badly I wanted to taste your pussy again,” he says.  Pulling the comforter down to my knees, his large hand grabs the inside of my thigh. “I want to eat you, feel you come on my tongue and then I want to fuck you harder than you ever imagined you could be fucked. You think you can handle that, Pinky? Can you handle me and everything I plan to do to you?”
Heat pools between my legs as his hand slides further up my thigh. His thumb strokes over the soaked scrap of lace covering me and he smirks.
“Thanks for leaving your panties on my lamp this morning,” he says. “You’re never getting them back.” 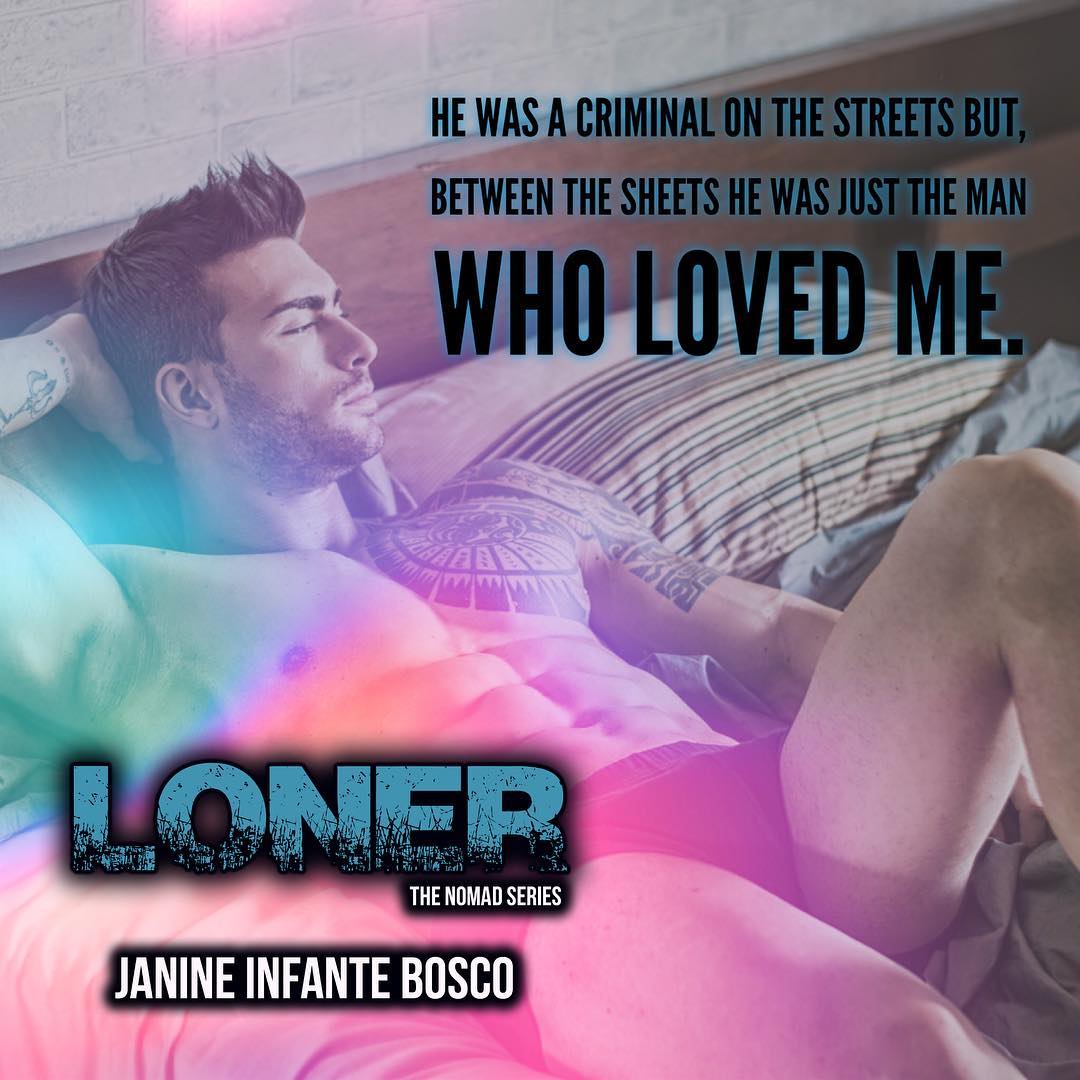 Janine Infante Bosco lives in New York City, she has always loved reading and writing. When she was thirteen, she began to write her own stories and her passion for writing took off as the years went on. At eighteen, she even wrote a full screenplay with dreams of one day becoming a member of the Screen Actors Guild.

Janine writes emotionally charged novels with an emphasis on family bonds, strong-willed female characters, and alpha male men who will do anything for the women they love. She loves to interact with fans and fellow avid romance readers like herself.

She is proud of her success as an author and the friendships she’s made in the book community but her greatest accomplishment to date would be her two sons Joseph and Paul. 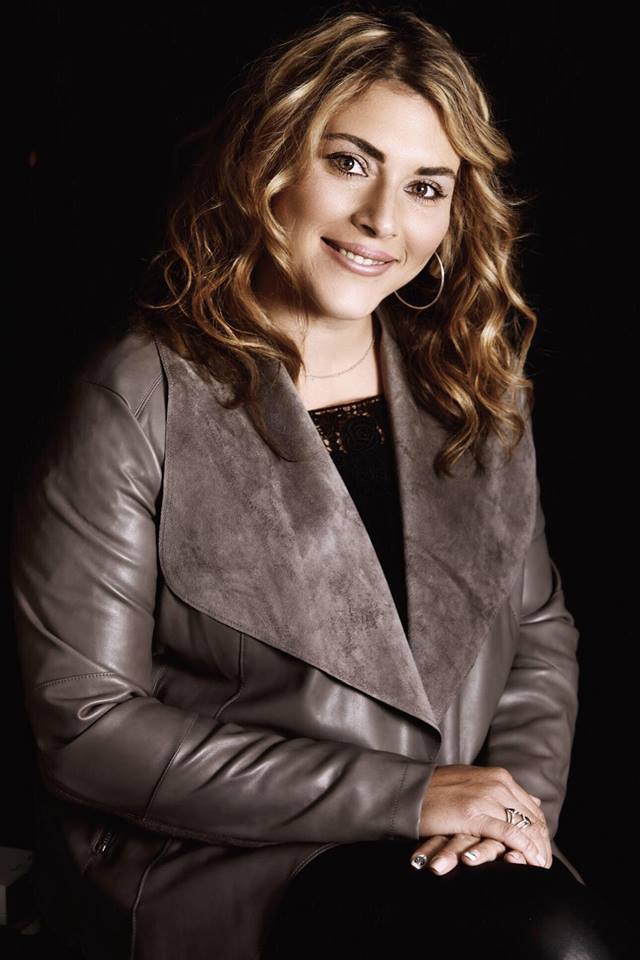